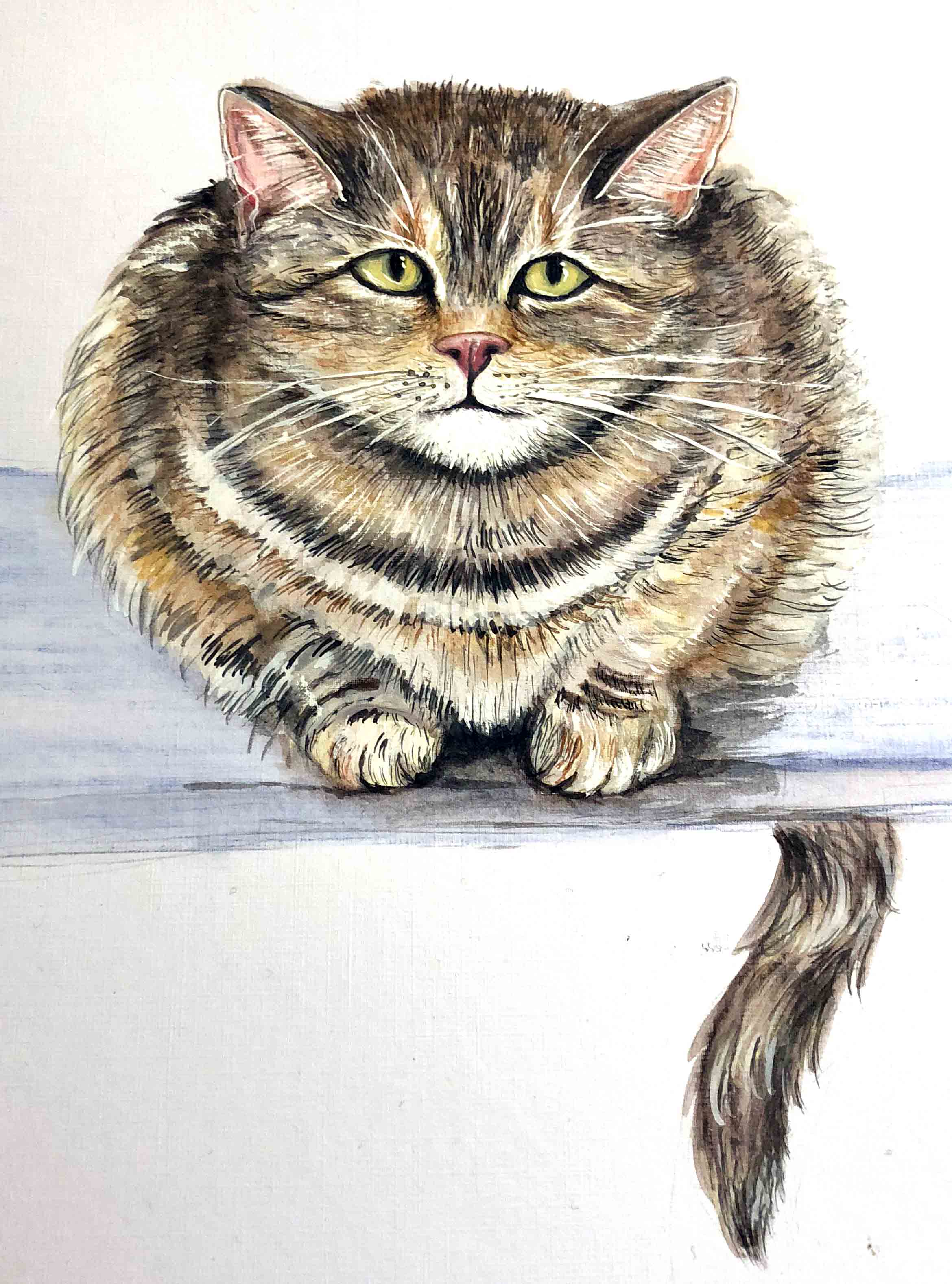 The last few months have been rather difficult for me. Being a cat I have routine and lifestyle requirements. Even though I am a yogic cat living with immense grace and wonderful humans, and have so much love and abundance in my life, I still sometimes forget mySelf and become overwhelmed by the trials and tribulations of daily existence.

Circumstances beyond my control - by which I mean that those wonderful humans made their own decision, (without consulting me) to move from our riverside meditation centre to a beachside yoga-shack around the corner from the beautiful Mount Eliza Ashram. I had been to the beach shack before and I did like it, especially because it was close to the Ashram, and I was sure the proximity to the residence of a great being and so many people focused on spiritual practice would give me extra Shakti.

But the moving itself was all a terribly disruptive process for me. Unable to participate fully in the move, I lost so many things: my favourite meditation spots, my favourite asanas (meditation cushions and blankets) were packed away, my bird’s eye river-view disappeared and I had to leave my friends behind. I was so worried about how I was going to cope. I wanted to be a good yogini and take it all in my stride but it was all rather daunting. What if there was no place and no space for me at this new location? What if I lost contact with the Shakti?

I decided to make the adjustment process easier by following the upward shift, the movement of inner energy that comes from following the Shakti. Durgananda says to stay in the flow of Shakti you have to do lots spiritual practice and always move towards the highest perspective possible. Things like mantra, scriptures, meditation, self-inquiry, yoga, being in good company all support aligning with a higher perspective and create a space that grace can flow in. I decided I to try all these different methods until one worked…. until I could find my place and feel strong in the Shakti.

Momentarily I was able to follow the upward shift when I thought that I would be leaving the pesky possums and the neighbour’s irritating dog behind, but unfortunately the shift didn’t last.  It turned out there are pesky possums here in Mount Eliza as well, and the neighbours here also have a very large barking dog that did not want to be my friend.

A few days after our arrival I made a big effort to follow the upward shift. I jumped up as high as I could and landed up on top of the wooden fence. I was looking for the highest possible perspective. I took a good look around, searching for the Shakti. Then I looked down and popped my head over the fence. I knew I wasn’t meant to go over the fence, but I just couldn’t resist the temptation and I jumped. It turned out to be a massive downward shift (I had suspected it might be, but I just couldn’t help myself, curiosity got the better of me.) There was a DOG!  A great big drooling dog. I reached out my paw and said a quiet, tentative meow. Maybe this would be my new friend? Grrrr, he answered. My fur rose up, my tail expanded, my heart started pumping. I backed away. No Shakti here. No higher perspective. The dog leaped towards me drooling abuse and gnashing his teeth. I was going to be his dinner.  I turned and ran as fast as I could. I scrambled over the fence and made my escape with only a whisker to spare. My heart was thumping so loudly I thought the whole neighbourhood could hear it. It was very lucky I have such a strong yoga practice and was able to do the back flip I’ve been practicing with Natji in order to get over the fence unharmed.  This fence did not hold the shakti. I did not feel safe!

Then, to top it all off, I was attacked again. Trying to recover from the dog I stalked across the lawn and these crazy dive-bombing hysterical, beady-eyed flying creatures plummeted towards me. I ran inside dodging their stream of loud abuse as fast as I could. “Haha, the dog attacked you”; “Haha you won’t make friends here because you’re a cat”; “Haha, you're too fat to fly”; “There’s no place for you here, get back where you belong”. But where did I belong? With my tail between my legs, I slinked inside. I found a cushion and began to wash myself. Trying to pull myself together, I searched for a higher perspective. I had heard Durgananda call these abusive flying objects myna birds, but they really didn’t seem very minor to me. They’re a major threat: I go outside and they attack me. They’re mean and loud and insistent. Why do they affect me so much?

I said some mantra and began to feel a little better, but still very sensitive and vulnerable. I wanted to go back outside but I wasn’t strong enough to go alone. I waited by the front door. Finally, Durgananda went outside and I went with her. The birds kept to themselves. I’m embarrassed to admit it, but those tearing-thought birds make me cower in a most un-cat like manner. From now on, when I’m having one of those more sensitive moments and want to go outside, I’ll have to put myself in good company and get Durgananda or Natji to come with me to protect me from their darting eyes, cruel words and abusive swoops.

After this failed attempt at finding a higher perspective I decided I would meow-ope under the bed. It seemed like the safest space I could find. While recuperating under the bed I was again able to find another momentary upward shift. It was about tuna. I love tuna, it is a sensory delight. I’m sure it’s an ambrosia that invokes the higher Self. Surely, now that we live by the sea, tuna should be much more readily available. My tuna portions should increase. I went to my next meal very excited, expecting a much larger portion, and then had a terrible downward shift when the tuna amount was the same as usual. I was so upset that my fur lost its glorious sheen and I returned to my meow-oping under the bed. I was beginning to feel very concerned I would never find my place again or feel the shakti.

After a little while of resting in my under-the-bed cave and saying lots of mantra, I became more centred in myself. My nervous system too was more regulated from the mantra repetition. So I ventured out of the gloom. I really wanted to feel like myself again and stabilise in the Shakti. Nothing had worked. I needed some grace. I found a wonderful spot on the windowsill in the sunshine. I rested into myself and prayed for grace. I felt the warmth of the sun bathe me in divine light. I stopped trying to force an upward shift in the outer world. As I settled into my inner world, wisdom and clarity soaked through my fur. I felt Shakti burble up from within and I had a great insight- I had been searching for the upward shift in the outer world. I thought the trials and tribulations of the outer world could be fixed by the outer world.  I though more tuna would make it better. I thought climbing the fence would bring more Shakti. I thought making new friends would reassure me I was a good cat. But all along the Shakti had been inside me. The upward shift had been available, but I had been too busy chasing outer world delights. As soon as I turned to my inner world, I found the Shakti again. I felt safe and I felt at home. I felt back in the divine flow. My fur became glossy again and I felt comfortable in my new space.