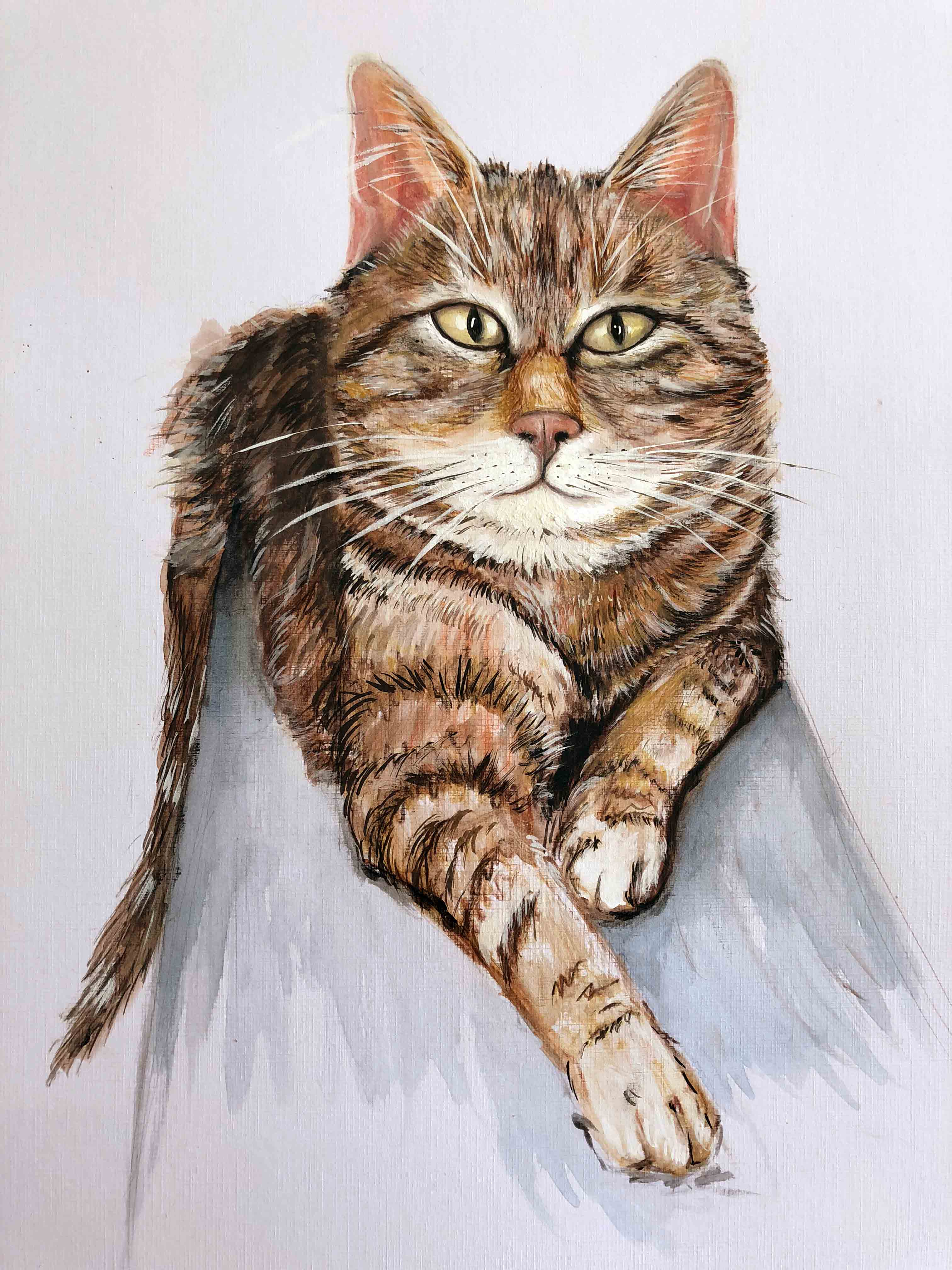 For a long time now, I really wanted to be initiated into the Siddha lineage from an awakened teacher. Durgananda’s teacher, Swami Shankarananda, holds weekend Intensive programs where he gives Shaktipat - the transmission or awakening of spiritual energy. I’ve heard that once the awakening has been received, meditation becomes much easier, (you get less distracted by the birds and the possums). Some time back I tried to give myself Shaktipat, by playing with peacock feathers on the puja. I think it worked a little, but now I want to receive a formal initiation, in person, from an awakened teacher like Swamiji. Most annoyingly, I am not able to attend Swamiji’s intensives because I am a cat.

My idea started to brew some time back when I heard that Hari, Vani Ma’s very handsome Siamese cat, had met Swamiji when he visited her house. In fact, I’ve heard a lot of things about Hari: I heard he’s a very good meditator, enjoys puja and has done a lot of sadhana, particularly in his relationship with Yogi Sri Stephen, Vani’s husband (but that’s a story for another time). I also heard that many years ago, when Durgananda was an ashramite, she visited Vani to play tennis. Hari wanting to participate, ran on to the court, raced up her leg and bit her on the backside.

I have never done that! I do run up her and jump on her shoulders sometimes when she’s practicing yoga or brushing her teeth, but I’ve only bitten her ankles, toes, fingers, hands, and hair. Though I did swipe and attempt to bite Natji on the nose once, when I was giving myself a good wash and he stuck his face into my personal space. Anyway, I decided that if Hari can get away with such behaviour and also get to meet Swamiji and receive Shaktipat, then I could too – by any means possible. I figured that if couldn’t go to an Intensive or to any of the programs at the Ashram, I would bring the intensive to me. (Though I did hear that a lady brings her dog to Satsang. Can you believe that!  A dog. A dog in the meditation hall!)

So I meditated and catemplated on how I might manifest Swamiji and Shaktipat in my own space. This got me to come up with a plan. It has taken a little while to execute, but I worked hard and pawed all my will into planning it. I overheard Durgananda telling Natji the story of Ramanand and Kabir, it went like this:

Kabir, the great 15th century mystic poet saint was born into a Muslim family in Varanasi. Ramanand was a great Hindu teacher. Kabir desperately wanted initiation from Ramamand but this seemed to be impossible because Ramanand was Hindu and Kabir was Muslim. Kabir (like I am now doing) formulated a plan where he could be initiated into the Ram mantra from Ramanand. One day, in the early hours of the morning before the sun had fully risen, Kabir lay in wait for Ramanand. (I also am very good at lying in wait- I hide in my tunnel until Durgananda walks past, then I leap out and grab her ankles).

Kabir hid himself against the edge of the steps that Ramanand was going to walk down, on his way to the river, to bath. His heart quickened as he heard Ramanand approaching. Because it was so early and not yet fully light, Ramanand did not see Kabir and he stepped on him (Natji did that once to me when he was wearing his work boots, I got such a terrible fright, but then he cuddled me so much I couldn’t help but forgive him). Realising he was stepping on a body he shouted “Ram, Ram” and removed his foot. Kabir leapt up in ecstasy, (I like leaping when I'm in ecstasy too) bowed at Ramamand’s feet and raced away into the shadows, in complete bliss because he had received the mantra. Kabir repeated the mantra diligently and because the mantra was a Chaitanya mantra, an alive mantra passed from teacher to student, it led him to his goal – Self-realisation.

I’m not Muslim but I am a cat; and I know Swamiji prefers dogs. So, I feel like my situation is very similar to Kabir’s.  Kabir seemed very smart and devotional, so I thought I would follow his lead and find a way to rest in the shadows to receive Shaktipat.  In fact, Kabir has a marvellous understanding about cats. In one of his poems he even says

A lion keeping watch
Over pasturing cows;
….A cat carrying away
A dog;….

This verse, says Kabir,
Is your key to the universe.
If you can figure it out.”

Oh yes I would like the key to universe, (or at least the door and the windows so I can come and go as I please).  I’m going to become that cat that can carry away a dog!  But I’m straying from my purrrfect plan…

Following Kabir’s method I decided that I must lie in wait for Swamiji. The question was how and where. I am reliant on Durgananda for transport and Swamiji doesn’t often visit the Maribyrnong centre. How was I going to be in the same place as Swamiji, unbeknown to him?

I overheard Durgananda talking to Patricia about Swamiji dropping past her place and resting before going to a meeting. I decided that this was a perfect opportunity. Sometimes I go to Patricia’s house with Durgananda so I know the layout. I decided to use all my mind and paw power to convince Durgananda that I needed to be at Patricia’s that day while Durgananda went to the city to run workplace wellness programs. It actually worked. I couldn’t believe it! I was dropped off in the morning and had time to work out where Swamiji was going to be when he visited. I prepared myself for putting my plan into action.

I followed Patricia around until it was clear she was busy and then I snuck into the room Swamji was going to be in. I hid, in the far corner, against the wall, under the bed, deep in the shadows. I was so deeply hidden that even Patricia couldn’t find me. She searched everywhere. I could hear her growing concern that somehow I had gotten out and how was she going to tell Durgananda.  I didn’t mean to worry her, but it was necessary that she didn’t find me, otherwise I would have been removed. Swamiji arrived, I could hear his voice and feel his presence. He had lunch (which was of no interest to me as it was entirely vegetarian and didn’t contain tuna). He seemed very content and I was starting to worry that he wasn’t going to use this room after all. Finally he came in. He sat on the bed and began meditating. Very carefully, I quietly repositioned myself until I was under the bed, directly below him. As he meditated I felt the shakti flowing into me. A deep well of spiritual energy awakened and swelled up inside me; I started purring;  then stopped, afraid he might hear me.

I drifted into meditation. A meditation so deep that I didn’t come out of it until Durgananda put her head under the bed and called my name. I wasn’t sure what had happened. One minute Swamiji was here and now Durgananda is here. What had happened? Where had I gone?

I felt like I had bathed in the deepest part of myself. It felt wonderful. The feeling lasted for days.  I could barely pull myself out of this meditation except, of course, to eat; but even tuna felt bland in comparison to the meditation I experienced.

I was so pleased that my pawsome plan had worked. I had received initiation from Swamiji. I am now a cat in the Siddha Lineage.