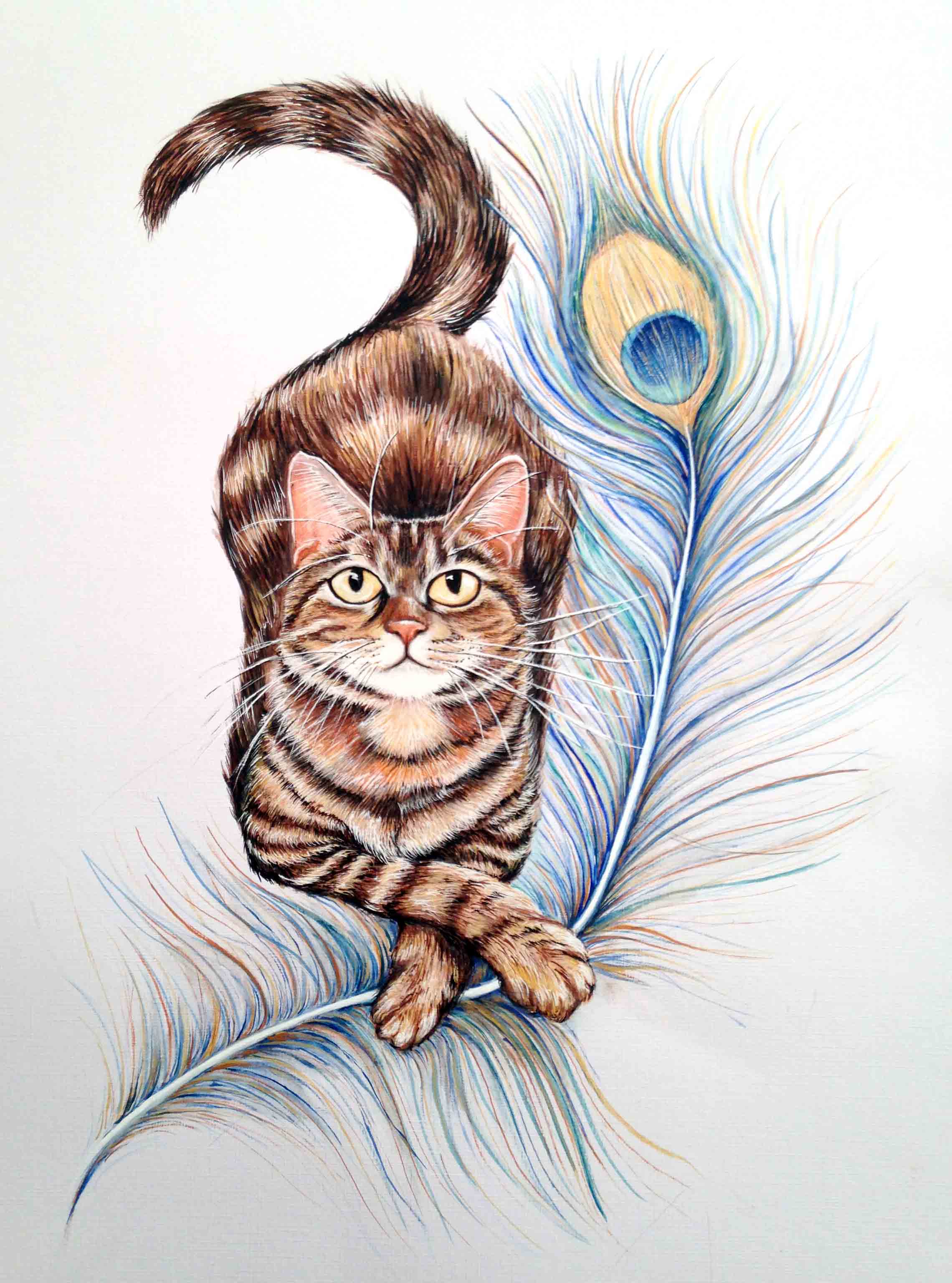 Durgananada and Natji left me all by myself for the whole day! That was horrible. I felt so lonely and bored. Then, being a very ingenious cat, I came up with a wonderful idea. As usual, I wanted to go with them but, as I’m a cat, there are many programs I am not allowed to attend.  This particular program was a shaktipat meditation Intensive at the Ashram. I really wanted to go because, if you are a spiritual seeker, the Intensive program is a very special program and I am an avid spiritual seeker.

During an Intensive Swamiji gives a special kind of pat, called Shakti-pat. I really like a good pat, so I wanted to get this energy infused pat too. Shaktipat is the awakening of the spiritual energy that is naturally within everyone. The yogis say that this awakening can be given in many different ways through, look, touch, thought etc. Swamiji gives it through touch. He comes over to each person as they’re meditating and touches them on their third eye. Then he taps them on the head with a wand of heena scented peacock feathers. As he does this, the Shakti that is awake in him awakens the energy within the seeker. This helps the seeker to meditate and transform spiritually. Natji had said that this shakti-pat can sometimes give you kriyas (inner and outer manifestations of shakti) where you might drop into deep bliss-filled meditation or, more excitingly, roar like a tiger. I thought that shaktipat might power my jumping abilities and I could leap higher, like I used to when I was a very small kitten. I also very much like the idea of roaring like a tiger, as there is this pesky white cat that keeps coming around and tormenting me, and I would like very much to be rid of him. You see, I am a very good seeker, particularly when I have a smell to follow, not that I like the smell of heena that much; I prefer tuna smells and would like to be awakened to this too. Plus, I really like feathers, especially if they’re attached to a bird!

I have tried before to awaken the Shakti that Swamiji says is in me, without any success. I’d heard that the Shakti or the kundalini energy is often described as a snake sleeping, coiled three and half times at the base of the spine; after shaktipat, she, the kundalini, awakens and uncoils, moving up the spine, dissolving blocks and moving energy about. I often walk up to Durgananda and get her to pat me, and give me a good scratch on my back around my tail, but this hasn’t awakened the snake yet. I know that hatha yogis used to do their asana practice in order to awaken this energy, so I have also been trying some different poses to see what might happen. The most obvious movement I could think of was to go straight to the spot where she, the kundalini, sleeps which, as far as I can tell is at the base of my tail, (which, by the way, is very snake like itself). I thought that perhaps by chasing my tail I could awaken her.

I had seen sufi dancers swirling and whirling in divine ecstasy on that funny flat square, that humans call an iPad. Inspired by this vision I ran madly in circles after my tail. I could never quite catch her, although, on the few occasions when I did, I would give her a big bite, thinking this would have to awaken her (and, let me tell you, a bite from me is very wakeful!). Ouch! No uncoiling snake appeared, no shaktipat happened, just a sore tail. When I gave my tail that extra hard bite I felt a bit silly and embarrassed. I wonder if those yogis that perform all sorts of strange asanas in order to awaken kundalini also feel silly? Why didn’t they just go and visit a shaktipat guru?

Chasing the snake in the form of my tail hasn’t work so I will try and imitate Swamiji instead. I will try and give myself shaktipat. And this is what I did today when I had to stay at home. Durgananda has these marvellous, mesmerising peacock feathers on the puja. They shimmer and flutter and seem to whisper to me when the breeze blows. Peacock feathers are very symbolic. The yogis say that the eye of the peacock feather is so powerful that it can impregnate a peahen from miles away; this is why they are used for shaktipat. I must say I’m really glad that I’m not a peahen, because I have been staring at them for a very long time and I certainly don’t want to give birth to a peacock.

Anyway, back to giving myself shaktipat. I climbed onto the puja; I’m not really allowed to do this but I figured today was an exceptional circumstance. Although, once on the puja I tried to grab a feather out of the stand but ended up knocking them all over. I got such a fright as I tumbled off the puja in a shower of feathers. My heart was pounding from the scare and also from the excitement of immanent shaktipat. I sat down on the floor, under a nearby chair and started washing myself. While washing I looked around to make sure no-one had seen my embarrassing tumble. No, it was just me. But, I am determined to grow spiritually and I know that shaktipat makes the journey possible. And I wanted to capture the wave of energy that was in the air from the Ashram. Without shaktipat and how it frees your spiritual energy, spiritual practice is hard and boring and can go nowhere. I want to go somewhere, I want to discover myself and become Self-realised and I certainly don’t want to be bored.

So I crept back over to the feathers and sat down. I tried to pick them up.  I got a little side tracked for a while as the feathers seemed so alive. I chased and chewed a few before I remembered I wanted shaktipat. I sat down again with a feather in my paw and attempted to whack myself over the head with it while thinking about Swamiji. I thought of Durgananda as well, and the feeling in the room when she meditates, and tried to invoke this feeling into me. I think I succeeded because I felt a little bolt of energy twitch in my tail, and then run along my spine, followed by tingles in my heart and joy burbling in my heart like a creek. Wow, what amazing feathers, what a powerful teacher Durgananda and Natji have. Just by thinking about Swamiji and imitating his actions I have managed to have shaktipat.

After all this excitement, I went and sat down on the bed to meditate, hoping Durgananda wouldn’t notice the feathers lying all over the floor in the other room.  My meditation went very deep. I could feel the Shakti growing in me and unblocking the contractions I carry. It is said that once you receive shaktipat, Self-realisation is inevitable. It may not happen in this lifetime but it will happen. The process has begun. I feel such a great relief, I no longer have to worry that I may not realise my true nature. Now, I can just do my practice and trust this awakened kundalini energy, letting her work her magic in me. I am looking forward to receiving more shakti-pats.