As some of you may know, Durgananda and Natji have been overseas and, being a cat and all, I had to stay in Australia. I wasn’t really okay with this (but I won’t go into that until I resolve a little more of my feelings about being left behind). While they were away I ended up staying in a couple of different locations. I did get well fed and cuddled, but I didn’t have as much freedom as I wanted and I had some difficulties enjoying the company I was in. One place had a cranky cat in it! Even though I feel embarrassed to tell you, I was actually rather scared of the other cat and I had a lot trouble keeping my space of good feeling. I think I had difficulty because I didn’t have my usual routine or my usual company.

By the time Durgananda got home I was in desperate need of some Shakti. How is it that she could change her routine, visit unfamiliar places and be with unfamiliar people and still feel good? I wanted to know how she managed to maintain her Shakti while being in strange places, and if she felt scared or cranky the way I sometimes do. So, I asked her to share a little bit about her travels…

Traveling, just like everything else, is wonderful as long as you follow the Shakti. There are many different ways to do this and I found that one of the easiest ways was to move into relationship with whatever space I was in. This could be as easy as smiling at a stranger or trying to order coffee in a foreign language; or as complex as processing old feelings that have unexpectedly arisen or to just mysteriously adjust my inner space to my changing external world.

While traveling, I didn’t have the consistency of my daily practice or routine to support me. In many ways this was a wonderfully liberating experience: to feel completely unconstrained and free to move in any direction at any time. In other ways it had the potential to become unsettling: What will happen next? Where am I going? What am I doing? These questions were as much about my inner world as about my outer world. How does my inner space meet my outer space? Where is the Shakti? How do I hold my inner connection in these unfamiliar places and spaces, with unfamiliar faces? What or who will catch me if I suddenly start to fall?

We arrived in Portugal where some of Natji’s family live, and left the Lisbon airport. I was excited but also sleep-deprived, hungry and grubby, with the potential to become cranky (yes, swamis are human — they get cranky and have feelings). It had been a long flight and I needed to orientate myself in this new space. The very long wait for a taxi, in a hysterical queue, was starting to rub me the wrong way and, by the time I settled into the back seat of the car, I was beginning to feel a loss of Shakti. I had a feeling of being on high alert and at any moment I might snap at the driver or at Natji. I needed to shift this feeling before it expressed itself unpleasantly. I knew a good sleep, a hot shower and some food would help, but they weren’t available yet. So, I closed my eyes, felt the feeling and asked the first and most important question of inquiry: “What’s going on here?”

As soon as I asked the question I felt a little burble of Shakti arise from my heart. A-statements (accurate statements of present feeling) rose to the surface of my consciousness: “I feel tired; I feel a little discombobulated; ohh, I’m so sore from that awful plane seat; my body feels twisted and my muscles are gripping too tightly”. As these statements came from my inner space, I felt the Shakti grow. By looking at, and being with what I was experiencing, the Shakti found space to expand into it. I felt myself start to stabilise and orientate in this new space. And even though I still felt hungry and grubby, I no longer felt in a state of high alert. The Shakti seemed to be saying to me: Embrace the space; feel your feeling and embrace the space; embrace the space. So, I felt the feeling and embraced the space. The different meanings of this B-statement (more beneficial statement) started washing over me in waves, each one taking away my crankiness and soaking my mind, heart and body with deeper understanding.

Embrace the physical space that you are in — look around, notice things, have wonder, have curiosity, have interest. See these new surroundings as an expression and a dance of consciousness.

Embrace the space of the space — the feeling space, the unspoken, the unseen, the felt sensation of a space. Feel the feeling of a place and the space, in that place, that contains the Shakti of the Self.

Embrace relationship to space — feel your feeling, feel the feeling of the space, feel the flow between your inner space and outer space. Feel the currents merge and adapt in response to one another.

“Wow, Wow, Wow!”, I thought, “It is all in the space. It is all in being in the space. Even if I feel uncomfortable in a space, I can feel what I am feeling to align with my Self. In the feeling of the Self everything will become clear”. This was not a new understanding to me but somehow I felt like I could embody it. My being will respond appropriately to my outer space and everything will align and flow. I turned to Natji, I smiled and said, “I’m so excited to be here!”

Over the next few weeks I had many more opportunities to put this understanding into practice. One of them was while exploring the mystery and magic of the Sintra Mountains.

I had been experiencing vertigo. I noticed it first, during transits at the airports. I would find myself on very long escalators, feeling as though I was leaning more and more forward and, at any moment, I could tumble uncontrolled and unstoppable through space. To compensate for that, I was leaning back very hard, clinging to the escalator hand rail and tightening the grip on my carry on. I hoped Natji would catch me if I fell. I didn’t fall, ever, and everything was always fine, but the experience was rather disturbing. As we travelled, this vertigo continued in different ways at different places: rooftops, stairwells, castle-walls, clifftops, and so on.

Standing at the rocky out top of the Peninha Sanctuary (which I later learnt was the location of an apparition of the Virgin Mary in the 16th century), in the Sintra mountains I was having one of my vertigo experiences. I decided to apply what had come to me during that initial moment of inquiry just after landing in Portugal, to see what effect it would have. Embrace the space, feel the feeling, move into relationship. Discover what’s going on here.

The space was an uninhabited, an ancient castle ruin with wild tempestuous winds and a spectacular, unbroken view. The stones felt as though they had infinite stories to tell: victories, tragedies and everything in-between. I felt awestruck by its bleak beauty, unspoken tales, and the uncontrollable power that nature sported at this height.

I opened my eyes, let go of fear and allowed my inner space to open to the outer space and move into relationship, to integrate. As I did this, my feet grounded and supported my body. My heart opened and the feelings I held there unravelled and began to dance with the wind. My body, while maintaining its shape, suddenly felt as though it had become porous, allowing me to merge with the space.

I felt an incredibly sense of oneness. I felt in relationship with myself and with everything around me. It was as though, by embracing the space and by feeling the feeling, I had created a new space or perhaps revealed a hidden space. Or, by merging my inner space with the outer space, a new space had been created and, in that space, the mountain top was able to reveal herself and all her attributes to me. Somehow, inexplicably and mysteriously, we danced. The mountain space caught me and held me. Not just the physical space but the space of Self, the wisdom of the Self, the love of the Self and the freedom of the Self. From then on, my vertigo dissipated as the Shakti revealed herself in this unfamiliar place.

When traveling, or when doing anything, I believe it is the embodiment of Shakti that makes a space or an event alive, interesting and dynamic. I think that just by asking the question, “Where is the Shakti?” She will manifest. No matter how unfamiliar a place is, the space of the Self, the space of good feeling is always available. Embrace the space. 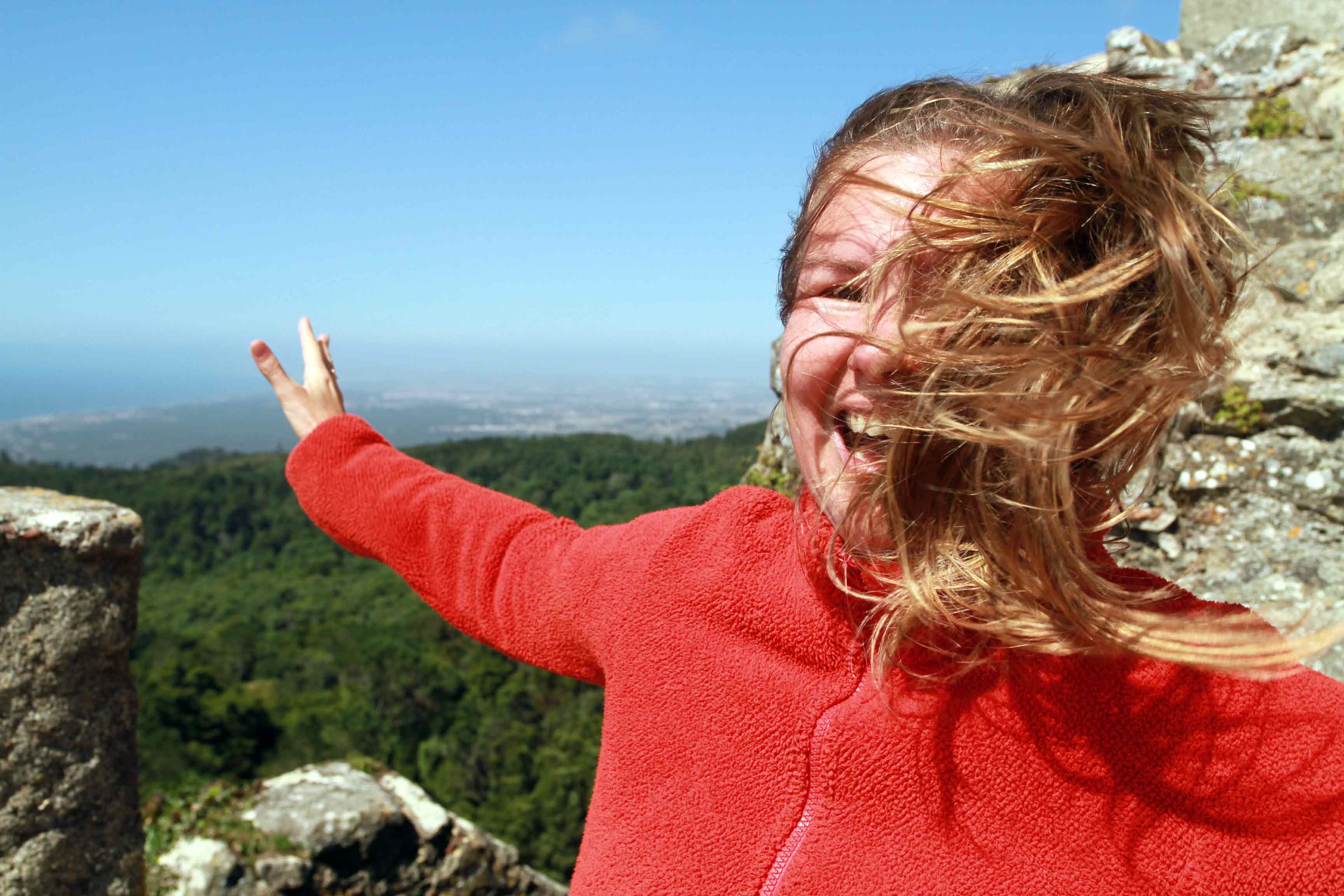