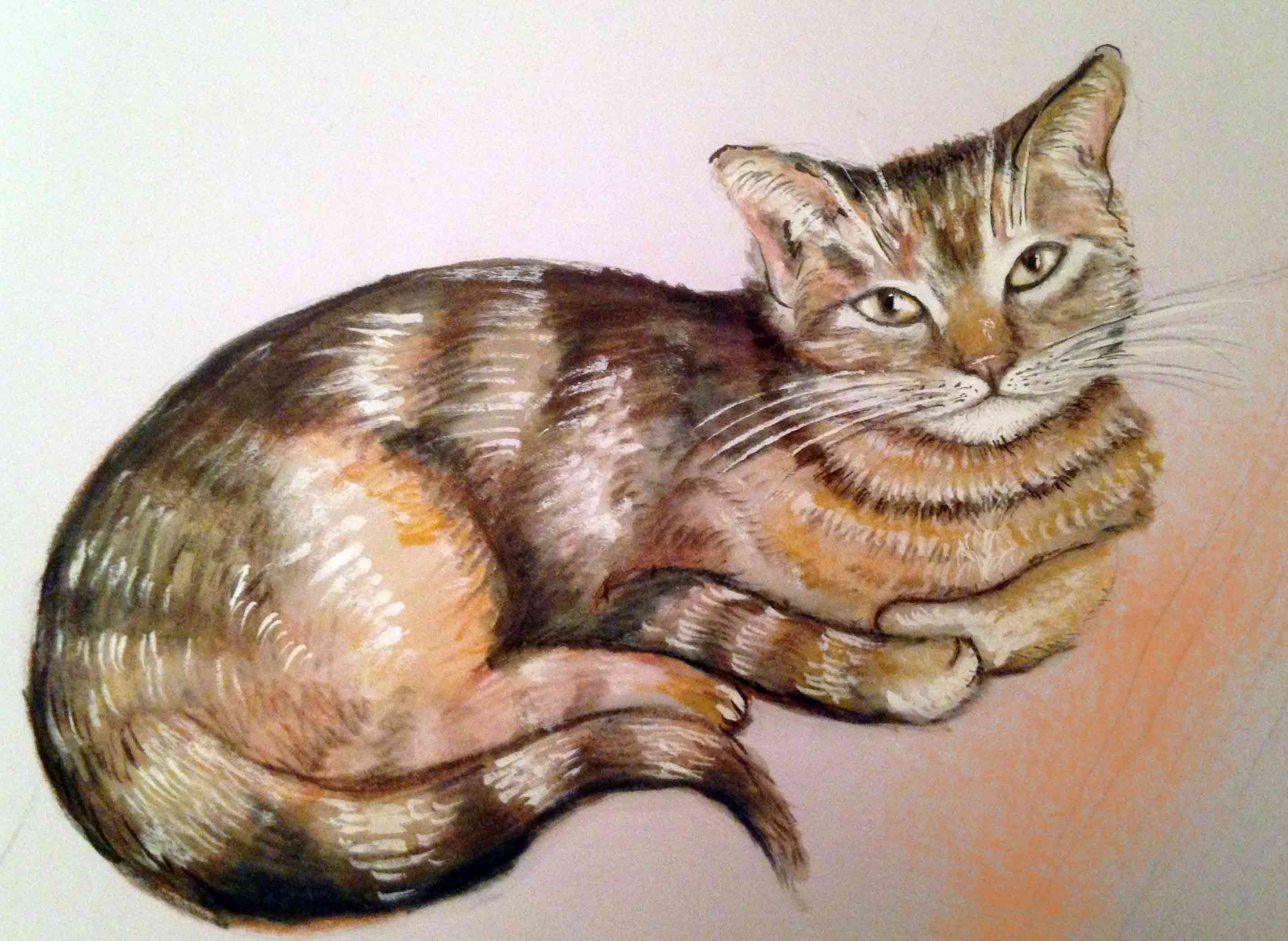 I’ve noticed that Durgananda wears a lot of orange. She has a fabulous orange shawl with dangly bits on it that I love to chase and chew on. When she’s not wearing the shawl and I can find it, I try to rip the dangly bits off. I know I’ll get in trouble for this, but it is too much fun to resist. I used to think Durgananda wore orange because she likes the colour or because she wants to look like me. You see, my fur coat has a lot of orange in it and I was thinking that she might be trying to emulate my good looks.

I wasn’t completely sure what a swami is, or what it means, so I asked Natji. He said a swami is a dedicated spiritual practitioner in the Hindu tradition. Durgananda is in the Hindu Saraswati order, a teaching tradition, so she has committed herself to sharing the knowledge, practices and wisdom her teacher taught her. I also think it’s a good thing she’s a swami because she can wear a colour that suits her.

I also found out that being a swami in the West is different to being a swami in the East. Durgananda said she is exploring exactly what that means and what a valuable expression of sannyas would be. Being a swami in the West, is a relatively new thing. For example, in the East, swamis are usually male and wander from place to place, staying at different ashrams or meditating in caves. Local people feed and take care of these swamis while they focus on their spiritual practices. Here in Australia it is not possible to live that way. What’s more, Eastern swamis don’t have cats as companions and if Durgananda had to wander around from place to place then I wouldn’t be able to live at the Maribyrnong Meditation and Yoga Centre.

Here, in Maribyrnong, Durgananda does all kinds of different things. So, I think being a swami means to share her meditative knowledge and yogic techniques with people so that they also can create an inner space of good feeling in their everyday life. I also think it means to be accessible and in relationship with people around her. I’m very lucky, Durgananda makes herself very accessible for me. Whenever she’s here I can always find her; she’s not hiding in a cave, (though sometimes I think she wants to) and when she meditates I get to curl up on her lap and meditate with her. Nobody else gets to do that!

Back to why swami’s wear orange. I’ve discovered a few different reasons. Natji said that he had heard that swamis wear orange because they need to be seen from far away so that students can either run towards them or away from them. I think running away from a teacher is a bit of a strange answer. A teacher is a great opportunity. Why would anyone not want a teacher to help them spiritually? Humans can be so strange. I always want to run towards Durgananda. Well, nearly always: I don’t want to run towards her when I’m playing outside and she wants me to come in or when she wants to put that disgusting flea stuff on me. Maybe humans are like that too, they don’t always want to do what is good for them.

There are also other reasons swamis wear orange. Orange is the colour of agni, fire and the colour of the sun. Fire has the power to transform and burn up waste matter and dross. Durgananda said that when you are doing your sadhana you burn in the fire of yoga. The inner fire of the Self transforms your negative tendencies and burns up your ignorance. My ignorance must be getting well and truly burnt. I love being in the heat. I sit in the sun as much as I can and I get as close to the heater as I can. Sometimes I get so close to it that it is uncomfortable and my fur nearly gets singed.

Durgananda’s advice is to find the right level of heat that will cook you to perfection. The perfect distance between you and the fire of yoga is different for everyone. If you’re too close, the frying is too intense and you burn to a crisp and dry up. If you’re too far, you don’t get enough heat so the fire of yoga can’t transform you and you stay damp and don’t get its benefits. I dislike being damp immensely. When Durgananda lived in the Ashram she said people would come and go. Some would stay for a long time and love it, while others would stay for a short time and find it difficult. Her teacher, Swamiji, said there was no point being in the Ashram if you were there and feeling tortured. Better to be a little further away and yearning for it.

The final reason for wearing orange is a bit goryer and freaked me out. The reason swamis wear orange dates back to many, many hundreds of years ago. Traditionally in India swamis would renounce not just their negative tendencies but all worldly possessions. After taking sannyas (becoming a swami) they would go to the graveyard and take the cloth that a body was wrapped in and wear it themselves. Due to the cloth being wrapped around a corpse it would take on an orangey ochre colour. I’m glad that, today, being a swami is more practical and Durgananda can just go up to Highpoint to buy her clothes. I’ve seen a corpse once, it was of one of those nuisance possums and there was no way I was going to take it’s fur and wrap myself up in it. Oh no, not me, I only want clean fur!

Durgananda says you don’t have to be a swami or wear orange to do your sadhana. You just have to be dedicated and want to know yourself. This is a very good thing for me as my fur is only speckled with orange and I don’t like wearing anything else and I’m not planning on getting it dyed. But just in case you do need to wear orange to progress spiritually I’m going to stay as close as I can to Durgananda as some of her orange might rub off onto me. In fact, I might try and pinch that shawl of hers (like I did with the bath plug the other day) and put it in my basket to keep me warm and to remind me that I am transforming in the fire of yoga.  Plus, I like being warm, especially as it is has been so unusually cold for this time of year.