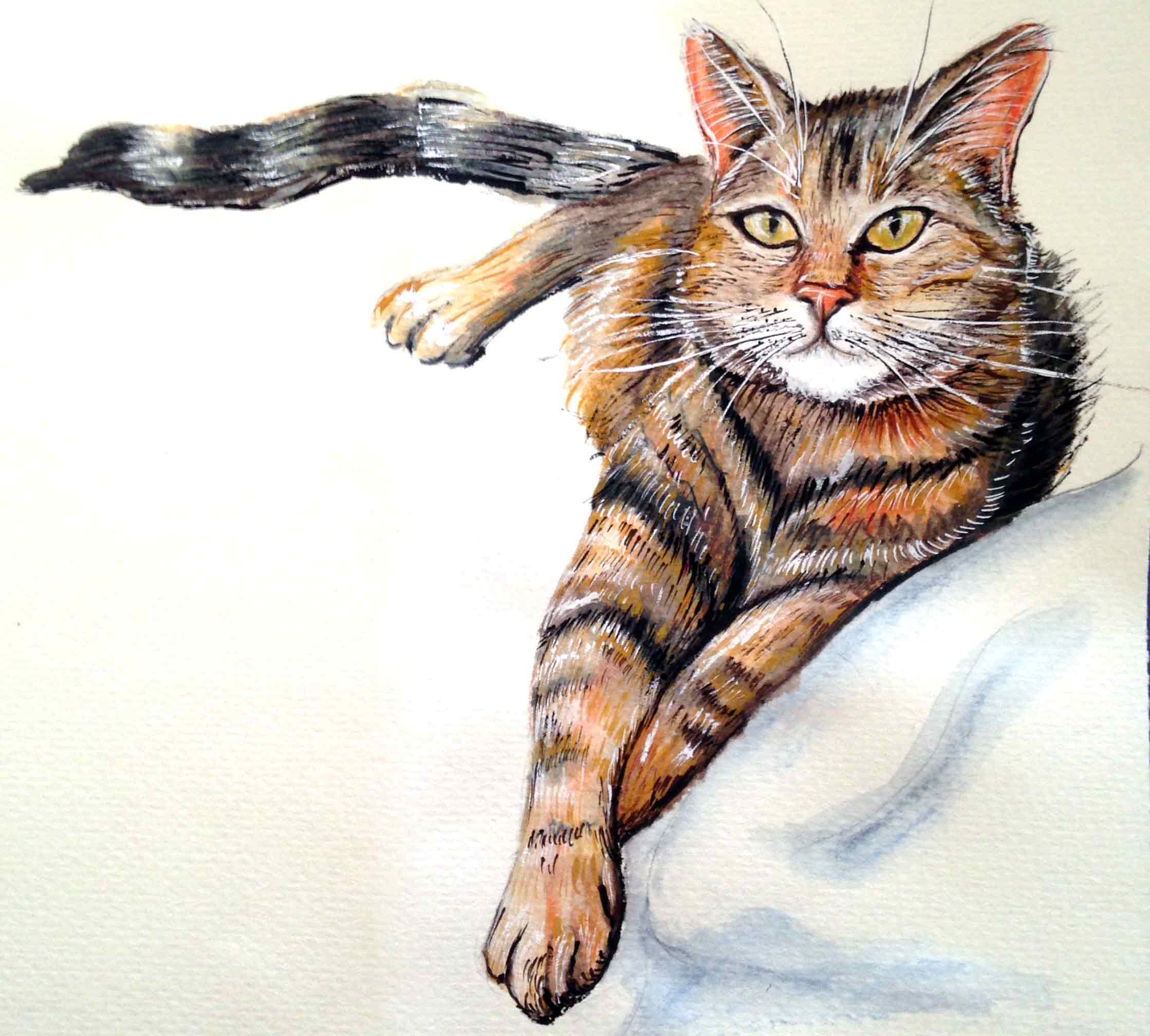 Yesterday evening Durgananda went out and left me behind! Can you believe that? She said she had to go to Satsang and it wasn’t an appropriate place for cats. I thought “that is ridiculous, I can go wherever she is going and Satsang is definitely something I would like to attend”. After all, I am very good at sitting and singing and I’ve heard that there is great chanting at Satsang. I tried very hard to explain all of this to her but she ignored me and left me here by myself.

I felt miserable and abandoned. I decided to have my own Satsang: I sat and I sang, and I sang some more, all on my lonesome. After a while this got a bit repetitive and, being a vital type of cat, I decided to do something active instead. I ate the rest of my food, performed some possum patrol to make sure the wayward possums stayed in the correct trees, enjoyed the view of the Maribyrnong river and then, when I had exhausted all possibilities, I meditated. As it turns out, meditating was far more uplifting than singing my song and it had an excellent result. By the time I had finished meditating Durgananda was home.

Durgananda told me all about Satsang. She said that the people attending did sit and sing and that it was called chanting. Swamiji, her teacher, gave a talk, everyone got say hello to him (I’d like to meet him one day) and then they meditated. I thought I did some of this too; I meditated and I chanted but I did it all by myself, which doesn’t create the same energy as when you do it together in a group. Durgananda says that Satsang means to keep the company of the truth and, when you embark on a spiritual journey, the company you keep is very important. That’s why I’m fortunate to be living in a meditation and yoga centre. I can keep good company with people who are like minded, that is, people who think cats are the best creatures around.

Durgananda said that, at each Satsang, Swamiji speaks from the teachings of different great beings. Last night he spoke about Gurdjieff. One of the things Gurdjeiff taught was about all the different ‘I’s inside us and the different voices they each have. For example, the ’I’ of fear, the ’I’ of anger, the ’I’ of sadness, the ’I’ of depression, and so on. In order to be able to hear the voice of the Self, which is the true ‘I’, we need to make friends with all these other ‘I’s. The different ‘I’s have to dissipate into the true ‘I’ of the Self. Gurdjieff described these voices as a cacophony of barking dogs inside your head. Yuck! I don’t want to have any dogs barking inside of me. The only barking dog in my universe is the awful one next door and I’ve tried to make friends with him but it isn’t working out very well.

Onetime, when Natji was here, he left the side door open and I went out without Durgananda knowing. I went next door to investigate the barking dog and offered a paw in friendship. After all, doing sadhana is all about moving into relationship.  The dog didn’t want my paw – he wanted all of me!!! He opened his great big drooling mouth and bounded towards me. I froze in fear! I thought, “This is the end of me. This must be what Durgananda means when she talks about being attacked by tearing thoughts”.

Then something else took over my mind – I think it must have been my higher Self, the ‘I’ that knows what is best for me, even though I don’t always listen to it or can’t always hear it. I fled. I ran like I have never run before. I think I may even have been flying like the birds I’m so envious of. I flew past Durganada’s office window and up the tree in the front garden and sat trembling in fear. Luckily for me, Durgananda saw me and opened the front door. I don’t think I’ve ever come back inside so fast!

If humans have barking dogs in their head all the time, they must be terrified. I couldn’t live in that state of fear or anxiety all the time. Durgananda says that’s one of the reasons we do spiritual practice is to become less afraid of our negative voices and to find the voice of the Self. She says that when she goes to Satsang her ability to hear the voice of the Self gets stronger and her true ‘I’ is able to reveal itself. I want my true ‘I’ to reveal itself. I really didn’t like feeling like I was going to be eaten up by that dog next door. I am going to find a way to be in Satsang. I hear there is a subscription so that you can watch it, live, online. Maybe Durgananda will get me that subscription. I want to experience the bliss of Satsang!